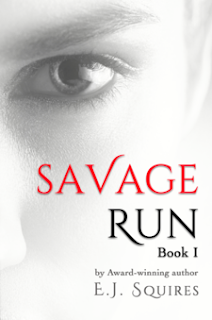 Savage Run is a YA novel set in a future time on earth.  The countries are no longer recognisable and governing styles have changed drastically.

Heidi lives in Newland, which has a hierarchical society and she is at the lowest rung; labourer aka slave. There is only one chance to improve her life, by entering and successfully completing the Savage Run.  Two problems, only boys can enter, and second, the weakest are bound to  perish during the gruelling  trials.

Nickolas Volkov, son of the country's president, sees a different future for Newland.  First, he has to figure out what to do about Heidi's false identity and entry in the challenge.

I like the characters of Heidi and Nickolas. They are both willing to go against the norm and the wishes of their fathers. The readers learn about their backgrounds and their hopes for the future.  Not everything, but enough to want to cheer them on.  In true YA fashion, we learn a little bit about the secondary characters and the descriptions are limited to that which is pertinent to the plot development.

This is not The Hunger Games, each participant is on his own, pitted against the challenges and the clock.  Yes, it is a game for survival, but there can be more than one victor.  I enjoyed following the progress of the competition.  I felt that the reactions of the other competitors toward Heidi were realistic.  How could she possibly be a threat to most of the others, many of whom were gargantuan athletes.

Heidi's self-talk during the challenges was well thought out and did portray the anguish and stress should would have been feeling.  I found that these passages brought me closer to her.

A good story, thought it did end rather abruptly leaving me wanting more.

Savage Run 1 is currently free from many online ebook retailers.