The Tale of Halcyon Crane by Wendy Webb 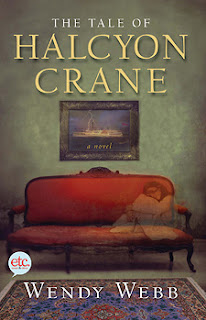 Dream or nightmare.  You receive a letter from a lawyer informing you that you have inherited a large estate from your recently deceased mother.  One problem, your father told you that she had died decades ago.  Hallie James faced that exact situation.  For the past thirty years, she had believed that her mother perished in a house fire.  Her father was the doting parent trying to make up for her missing mother.

To learn about her mother, she travels to Grand Manitou Island, located in the Great Lakes.  What she finds there is a tight knit community that hasn't forgotten her and what caused her father to flee the island.

While Hallie is trying to reclaim her heritage, she encounters strange occurrences and ghosts.  She has to decide what cost she is willing to pay for learning about her past.

I listened to the audio book version twice as read by Cassandra Campbell.  Unabridged from Blackstone Audio 9 hours 52 minutes.  Ms. Campbell provided great voice characterisations especially for Iris, the ancient housekeeper.  I was mesmerised as she told her tales.

I had a level of unease throughout this book.  Nothing I could quite put my finger on, but it was lurking there and had me peering over my shoulder when listening alone.  I imagine that Hallie felt the same when she was exploring her mother's house and when she visited various sites on the island.

This is author Wendy Webb's debut novel.  I totally enjoyed the story though I did question one part.  There are no cars on the island and all transport is via horse drawn carriage (except for emergency vehicles).  A character comments that it is acceptable to drink alcohol  and drive a horse buggy on the public roads.  I live in an area where there is a large population who travels via horse drawn buggy.  They have to follow the same rules of the road as do all other persons operating vehicles on the road.  I question that the United States does not have similar rules of the road and would drinking and driving really be allowed on the island.   In no way did this affect my enjoyment of the book.

The Fate of Mercy Alban
The Vanishing
Her fourth book is currently in the hands of her agent.
Posted by Heather at 08:00