A Perfect Grave by Rick Mofina 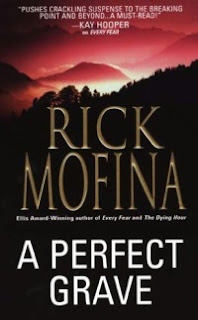 Jason Wade is an up and coming crime reporter for the Seattle Mirror.  He is looking for a story that will lift him from his current troubles and firmly position him atop the pack when he hears a garbled message on the police scanner.  Could be that lead he is looking for to meet his next deadline.  Something has happened in a nun's residence.

Meanwhile, his father Henry, is peering longingly at the drink sitting before him, struggling not to break his two years sobriety. That would end his career as a PI and still not relieve him of the ghosts that haunt his past.

It isn't long before father and son are embroiled in their respective cases.  Jason has his editor breathing fire down his neck, demanding results,while his father's inner demon is pressing him onward.

I enjoyed learning a bit of how an investigative reporter works.  Sort of like a police detective but without the legal whistles and bells of search warrants and such.  There is a good portrayal of the difference between how the public relates to the police and how they respond to journalists.  In this case, Jason is perceived as the man who is actually looking for the truth not just some one to take the blame.

Mr. Mofina paints a very believable story.  There are no sudden leaps in logic that solve the case, or mysterious envelopes of clues that arrive on a desk just in the nick of time.  What there is, is a hard working news man with a nose for ferreting out the clues and the dedication of double and triple checking his facts before publishing.

This is the third book in the Jason Wade series, though I found that you don't need to have read the previous ones to enjoy it.

If you enjoy stories about investigative reporters, you might also enjoy The Silent Reporter: Hyder Ali #1 by Mobashar Qureshi

Jason Wade Series:
Books by Rick Mofina that I have also reviewed: