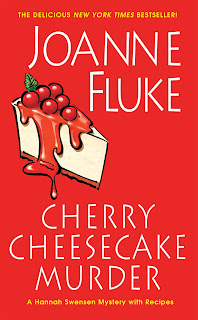 This is a good, solid cosy mystery.

Hannah Swensen and her partner Lisa, own The Cookie Jar coffee shop.  It's the place in Lake Eden where many people visit regularly for coffee, cookies and gossip.  In other words, they don't keep secrets from Hannah.  Neither do the members of her close knit family.

Life in town gets disrupted after her sister Michelle recommends it as the locale for a movie shoot.  The production is going well until the producer ends up dead while demonstrating a suicide scene.

Even though this is a well established series, I was able to jump in at this point without having read any of the earlier books.  The main characters are well fleshed out and after a few chapters I was feeling as though they were my neighbours and that we'd sit together should I bump into them in The Cookie Jar.

I particularly enjoy the rivalry of deputy police chief Mike and dentist Norman for Hannah's affection.  Their united front when a third love interest appeared was particularly intriguing.

As much as this book is a mystery, I felt it was much more a study of the interactions within a small town, and how people who live so closely together, can put aside their differences when one of their own comes under some sort of threat.

A Cherry Cheesecake Murder is the 8th Hannah Swensen Mystery series.   It also marked the first time that one of JoAnne's books made the New York Times Best Seller list in March 2006.

In 2015, the first Hannah Swenson book served as the basis for the made for television movie "Murder She Baked - A Chocolate Chip Cookie Mystery" which was later followed by "Murder She Baked - A Plum Pudding Mystery".  I watched both of these and enjoyed them immensely even though I hadn't read those particular books.

Thanks to author Joanne Fluke and Kensington Publishing  Corp. for use of the cover image.
Posted by Heather at 08:00

Love all her books