Rooftops of Tehran by Mahbod Seraji 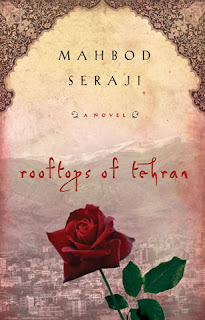 If I had known how good this book is, it wouldn't have sat on my book shelf for the past four years.   I don't recall what I was expecting, but it was far beyond what I could have imagined any coming of age story to be.  It had me on the edge of my chair alternately sobbing and then cheering for the characters.  I have to call them characters to remind myself that this book is fiction.

The story begins in Iran in 1973 when the Shah is in power and his subjects are tightly overseen by the SAVAK, his secret police.  Daily life continues as in many countries as long as your political beliefs are line with that of the Shah or if they differ, they must be extremely well hidden from all.

Seventeen year old Pasha Shahed is in his last year of high school and when he graduates, his father will send him to the United States to study engineering.  He spends most of his free time with his friend Ahmed. Together, the boys spend hours atop Pasha's roof, which is common practise in Tehran. They talk of all those things that interest teenage boys: school, teachers, their families, futures and perhaps, most important of all, girls.  Ahmed loves  Faheemeh, a girl from a few streets away, while Pasha is in love with Zari, the girl next door who is engaged to another of his friend's.

One of my favourite parts of reading, is learning about cultures different from mine.  This was my first exposure to Iran outside of news reports.  It was refreshing to learn of it's people and their daily life.  They have many of the same concerns such as housing, food, education, but they must also contend with a government who's foremost concern is their leader.  Any one who disagrees with the leader could be subject to dire consequences.  This is something that Pasha must be ever conscious of.

At this formative age, Pasha has to deal with the despair of others actions.  There was nothing in his formal education to prepare him and he has only his family and best friend to aid him.  It's very tough for him to grow into an adult when he knows that his government does not have his best interests at heart.

One of author Mahbod Seraji aims was to make the reader feel as though he or she was part of the story, sitting on the roof with Pasha and Ahmed.  Well, he certainly succeeded with me.  I felt I was sitting beside them, glancing over the neighbouring wall to Zari's house.  I could see the same stars that they were staring at.  I cried with them and I cheered them along at their successes.

One thing that surprised me, was the amount of freedom of the women.  Some choose to wear head scarves of various types, yet other were unveiled.  All were accepted.  They also went about freely in the streets to do their shopping and to gather with their friends and visit.  News stories had me almost believing that women were forced to cover up at all times  and that they had to be accompanied by a male relative every where.  Thank-you to the author for this clarity.

I loved this book.  Every minute spent reading it was dear to me, even when bad things happened.  I'm sorry I left it on my shelf so long before reading it.  I would happily recommend it to anyone looking for a more truthful look at Iran and it's people and culture.  The Rooftops of Tehran would make an excellent selection for your next book club read.  And Mr. Seraji, please don't keep me waiting much longer for your next book.

Thank-you to author Mahbod Seraji for my review copy.
Posted by Heather at 08:00