The Castaways by Elin Hilderbrand 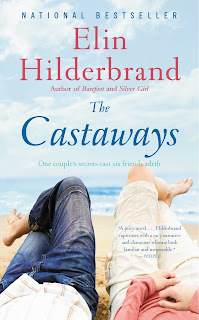 I know how shocking it can be to receive a phone call telling you that one of your best friends has died, but imagine that you learn that two of your friends have died in a boating accident.  That is exactly what happens during the opening pages of The Castaways.  Popular couple Tess and Greg MacAvoy had gone sailing to help celebrate their Wedding anniversary, and now, five hours later, they are dead.

This event starts a cycle of introspection, self recrimination and even personal crisis among the three other couples who formed the social group known as the Castaways.  To complicate matters, the young MacAvoy twins, Chloe and Finn, are in need of replacement parents.

I knew nothing about this author when I found this book.  The idea of a mysterious boating accident was intriguing though.  I have since learned that author Elin Hilderbrand is known for her "Summer Beach Reads", not a genre I'd heard about let alone read.  I'm on the fence about this book.  I did appreciate the friendships between the couples and their grieving process, but I can't say I really liked, nor identified with any of the characters.   The women were totally lost to me.  I don't think I'd be friends with any of them should our paths cross. I could respect Ed, the police chief and also Jeffrey the farmer, both good solid kind of men.  It surprised me that the couples could have stayed friends for so many years when they had all these hidden insecurities.  I am guessing that the inertia of the past kept them together.

I felt that the author was trying too hard to make Greg sound like god's gift to women.  He is type of man that I have warned my daughter about.  I wouldn't have given him a second look.  And the gift giving thing.  Why make so much effort to keep reminding the reader that they don't give gifts to each other,  How odd. They would accept being 'treated' to a meal but gifts were a no-no.   This seemed as though it kept being trotted out and re-enforced but to no real purpose.

I was quite confused at the beginning of the story by who was married to each other, and who was having or had had and affair, so I made a little chart and it really helped to keep things clear. 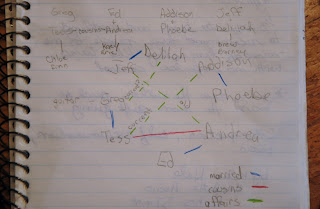 While I did have a paper copy of the novel, I chose to listen to the audio book from Hachette Audio  as read by Katie Hale.  12 hours 57 minutes.  There was nothing distinctive about her reading.  She presented each of the four six narrators in the same voice, which while pleasant to listen to, didn't distinguish the characters from each other.

During my time with this book, I was disgusted,  confused, amused, titillated and much more.  Yes, there was eye rolling and sympathy as well.  As I said, I'm on the fence about it.

Thanks to Little Brown and Company for my paper review copy.
Posted by Heather at 16:13

Nice review, Heather. I read this book a number of years ago and don't remember much. However, I just looked at my review and apparently I loved it!!! I've read a number of Elin's books and have enjoyed most of them for what they are. Light, quick reads usually set in Nantucket that include some characters who aren't that believable or situations that are pretty dumbfounding. I still find them fun to read. Go figure.

I like your chart. I generally do that with Elin's books, too.