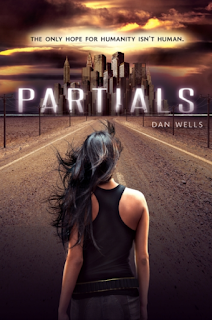 The year is 2076 and the human race has been devastated by a war with engineered humans, the partials, and a virus thought to have been released by them.  The remaining humans, numbered at perhaps 35 000, are isolated on Long Island, New York.  The clock is ticking against long term survival, as no human babie,s born since the war,  have survived longer than four days.

Kira is a sixteen year old medic still in training.  She seems to be a natural when it comes to medical research.  She realises that she'll have to run tests on a partial if she is going to save the babies.

At first I questioned whether the teens would have enough training for the jobs they were doing.  Then I though about how much time is wasted in our current education system with fun things and not actual learning.  A directed course of study could give students the knowledge needed within the time frame of the book.

I liked Kira.  She's smart and willing to disregard the politics and get things done.  She also exhibits the leadership to get those around her to support her progressive activities.  It was interesting watching Samm develop from a silent character to one with an active stake in the outcome of Kira's research.  Not like a prisoner with Stockholm syndrome.

I listened to the unabridged audio book as read by Julia Whelan.  I did have a little trouble with her male voicing at first.  As I got involved with the various characters, this mattered less.

I found this a truly enjoyable audio book.  I liked the idea of the setting on Long Island, some place I've never been.