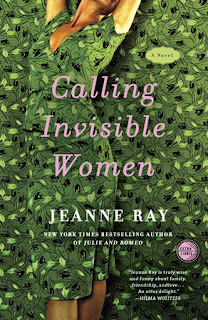 How did I ever manage to miss this book when it was first released, it is brilliant.  It's easy to feel invisible when you walk into a crowded room, but to feel the same in your own home, that's seriously bad.

Clover is mystified and definitely panicked when she first notices that she is invisible.  Not the invisible you might feel at a large gathering, but the kind where you can't see your hand nor any other part of your body.  She has gone transparent yet her family doesn't even notice.

Soon, she learns that other woman are turning invisible and that some of them have formed a support group.  What she hears from them encourages her to brush up on her neglected reporter skills to try and figure out what has happened.

This is the most original story I have read in ages.  It truly speaks to that part of me that feels lost in large groups.

I love the character of Clover.  Author Jeanne Ray did a terrific job creating her considering that she couldn't rely on Clover's physical characteristics.  Clover falters at first, but quickly regains her balance and even confronts some of her fears while invisible.  She somehow manages to grow in a situation that would humble many others.

After reading this, I want to buy copies and give them to all the women of a certain age that I know.

I read that book awhile ago, then passed it to all my friends to read. It is a great book.