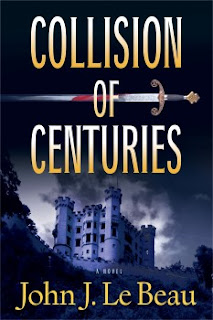 It's pretty straight forward, you get sick, you visit the doctor, you take the prescribed medicine and you get better. That is, unless you are in a particular Bavarian town where a plague,  the Black Death, has reared its lethal head once again.

Kommissar Franz Waldbaer is called in to investigate a suspicious death at the remote castle Schloss Winterlock.  It soon turns into a murder investigation with links to an unusual outbreak of plague.  Waldbaer has to work quickly to solve this case before the illness spreads outside of Bavaria and Germany.

This is the very thing that medical researchers are trying to keep ahead of, the recurrence of something long banished, that would spread infinitely fast via today's rapid transit systems.  In modern times we've forgotten the horror of mass deaths from disease, and quickly bury thoughts of SARS and avian flues.  It would just take one mad man to wreck global havoc.  Author John J. Le Beau did a good job of conveying how this very event could possibly happen.  Sure, it is unlikely, or is it....

I like the character of Kommissar Waldbaer.  He is single minded in his determination to solve the entire case, not being satisfied with just finding the culprit in the murder.  I do  think that it would be enlightening to watch him work, were he real.  CIA Agent Hirter does much background work that he shares with Waldbaer. I wish he were more involved in the story, though he worked with the Kommissar in a case in an earlier book in this series, so perhaps he is more fleshed out there.

The most fascinating and least understood character in the novel, is the perpetrator of the evil behind the plague deaths.  He is certainly egotistical and probably a psychopath.  That's all I can say without giving anything away.

I enjoyed the story and it's setting. I am left pondering whether this type of scenario is possible/probable.  Each book I read is a learning experience. Aside from being entertained, I did learn a bit about Germany and the challenges of maintaining historic properties.

Thanks to Oceanview Publishing for my review copy and for use of the cover image.
Posted by Heather at 14:23