Remember Me by Christopher Pike 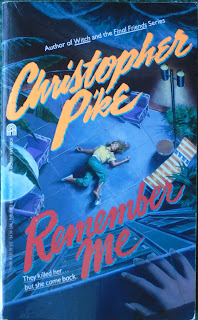 This was a good who-done-it mystery where the murdered girl investigates her own death.  Shari and her friends are at a party when they decide to play at the occult. They awaken a spirit and next thing we know, Shari is dead.  Accident or murder.  There were several twists and turn in the plot that I would never have expected.

These sound like typical assortment of  teens, self absorbed, superficial and materialistic.   i think that many teen readers would be able to relate to the characters.  I found the response of the teens to Shari's death realistic, some acted in ways I might expect, yet others not at all.