The Golden Compass: His Dark Materials # 1 by Philip Pullman 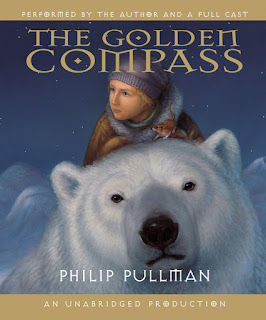 I listened to the unabridged audio book version of this, and while I enjoyed the story, I didn't so much like the full cast narration.  There were too many widely differing voices vying for my attention.  I do think that it would have been better listening with one female voice for Lyra and one male voice for every one else.

Lyra has been left in the care of the staff and students of Jordan College.  While they care for her, they must place their jobs and studies ahead of her.  They do their best to guide her, but that is the job of a parent.  Her constant companion, Pantelaimon,  acts on instinct to protect her, but a daemon can only do so much.  He can't keep her safe from adults who have other plans for Lyra.

Once they are torn away from their home at the college, they experience a series of adventures that help uncover a great mystery.  Throughout these events, Lyra is forced to grow up and to learn to trust her own judgement.  While at the college, she has led a sheltered life where others tell her what to do; after she leaves so much follow her own path.  Even I had trouble deciding who was good and who was bad in this story, so it isn't surprising that Lyra was likewise challenged.    I did like that once she had made up her mind, she was firm on her convictions and became steadfast friends to several characters.  This is a good model for the young readers of The Golden Compass.

As I listened to the story, I refected on how significant the daemon was to each young person.  They never truly were alone.  Imagine if our children were raised with such a constant companion.  I imagine it would have an overwhelmingly positive influence and that our children would generally gorw up to be better balanced adults.

I loved this book but have never listened to the audio version. If I have loved a book I try to avoid the films or TV series simply because they never seem to match up to my impressions of the characters from the books. Harry Potter was the exception though! xx