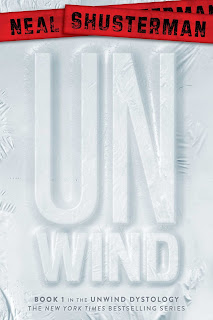 I wanted to read Unwind in one sitting, but that would have meant a real late night/early morning.  I made the adult decision and slept.  Many of the  characters in this book will never make an adult decision thanks to the actions of their parents or guardians to unwind them instead.

It's a little scary how close the subject of this book is becoming to reality.  I recall hearing of at least one couple who conceived a designer baby in order to save the life of their existing child.  All it would take is one unscrupulous doctor....

The new Bill of Life protects life from the moment of conception till the age of thirteen, after that parents can chose to unwind the life of their child.  Theoretically, the child's life doesn't end, as all his or her body parts are redistributed to others in need of a transplant.  If a child makes it to adulthood at eighteen, he or she is safe.

As a parent myself, I can't imagine sitting in judgement of whether my child, who I've lived with for years, deserves or has earned the privilege of continued life.  On the other side, the kids have the belief that it can't happen to them no matter their behaviour.

I was un-nerved by the theme of this book.  What could have happened in their society that drove them to such a point.  This is a thought provoking book and readers would benefit from having someone to discuss the concepts imagined by author Neal Shusterman.