A is for Alibi by Sue Grafton 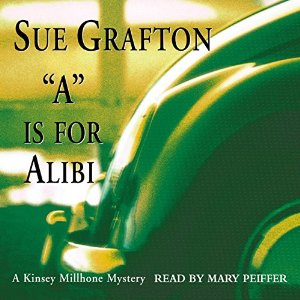 Nikki Fife has just been released from prision after being conviceted of murdering her husband. she has hired  PI Kinsey Millhone to find out who really killed him.

The case is eight years stone cold, but Kinsie, in her brusk style, manages to ruffle more than a few feathers and searches out several new leads.

This is a good introduction to a series that now extends to twenty-four books.The most recent book in the series,   X , was published in January 2015.

While this book is dated by the technology, Kinsie's investigative techniques are solid.  As a lead character for a series, she is firm in her commitment to her clients, she's not perfect, but she tries hard to stick to her personal code of conduct.  She is a character that I could grow to like quite well.

Author Sue Grafton has assembled a likable pool of suspects, and I was even cheering for some to not be the murderr.  I was kept eagerly listening  till the final moments.  I listened to the unabridged audio book from Books on Tape.  It was read by Mary Peiffer.  She was able to emphasis Kinsie's no nonsense nature but also bring out her compassion when needed.