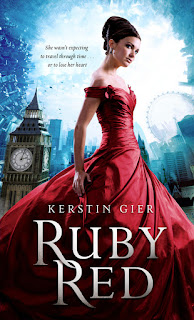 Time travel books are one of my favourite genre.  I particularly enjoy reading how the travellers copes with his or her alternate time periods.  In this novel, Gwyneth Shepherd has known about such travel all her life, but had expected that her cousin Charlotte would be the traveller.    Author Kerstin Gier well conveyed Gwyn's confusion and displeasure when she realised that she would be the traveller instead.

Joining her in her travels is Gideon; he has been training his entire life for these adventures.  Unlike him, Gwyn will have to use her instincts to guide her through the different time periods that she visits.  She also has a unique gift that should prove helpful.

Gwyn and Gideon make an interesting pair.  He wants to do this travelling and Gwyn is as of yet ambivalent about it.  He has been trained in skills such as fencing and period dance while she hasn't.  Time will tell whether Gwyn's lack of training will be a hindrance or an asset in their future.

I can't decide whether I like Gideon or not.  He is very self assured, almost smug in his superiority over Gwyn.  I supposed that he would need that assurance when travelling into different time periods and unknown situations.  Like Gwyn, he has to decide who is telling the truth and what that means for them.  Will he be able to stand up and make his decision or will he blindly follow what he has been told by the privileged old men controlling them.

I love the descriptions of the clothing that has been carefully crafted for the two of them.  What good would a time travel story be without such wonderful outfits.  It helps to set the mood by understanding the challenges of 'fitting in' in the past.

I listened to the unabridged audio book read by Marisa Calin.  8 hours 50 minutes.  Ms. Calin helped bring life to the characters.  She particularly brought out the venom of Charlotte's  mother and the neglect of Gwyn's grandmother.

I felt that the book ended too soon.  There was so much time spent building the characters and the settings, then a few short events and it was over.  Fortunately the story continues in Sapphire Blue.

I like time travel books though I was wary when I first got to them!