The Ghost and Mrs. McClure by Alice Kimberly 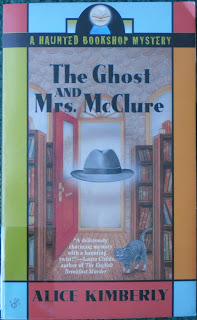 In works of fiction, authors have the freedom to kill whomever they desire.  When author Timothy Brennan agrees to a book reading at Pen McClure's books shop, he doesn't realize that he is the one that will end up dead.  Pen has a lot at stake and has to make this shop a success.  she can't allow this murder to go unsolved.

Not satisfied with the progress the police are making, Jack Shepard is determined to help with the investigation.  Only problem, Jack is long dead and his ghost haunts the building where the book store is located.  He has to work through Pen to get the job done.   It was totally amusing that while Pen still thinks Jack is a delusion, she wants his help and seeks comfort from him.

The author employed a colourful assortment of 1950's era slang.  Some I understood, but there were a few I had to re-read to understand.  At first, I felt the usage of these was overdone, but as I spent more time with Jack the Ghost, I realized that a detective of that era probably did speak that way and that it wasn't an air or image he was putting on.

I enjoyed this story and the characters of Pen and Jack.  Even though they are very different people, they work together well and compliment each others skills.

There are six stories in the Haunted Bookshop Series.

Author Cleo Coyle ( which is husband and wife team of Marc Cerasini and Alice Alfonsi)  writing as Alice Kimberly
Posted by Heather at 08:00

Nice review, Heather. It sounds good. I have 3 other books from this series, but I haven't read any of them. Maybe one day...

I'm familiar with Cleo Coyle, but I didn't realize "she" was a writing team. I seem to remember that "she" wrote under different names, but Alice Kimberly didn't sound familiar to me. Thanks for pointing that out. It's confusing when a writer (or writers in this case) uses so many pen names.