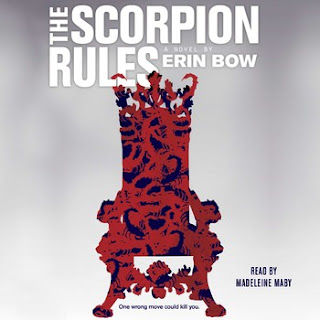 I did not 'get' this book.  From the first, it was obvious that there was no hope for the children, so why bother with the story.  I was confused by the audio between who were computer characters and who were human.  I really wanted to love this story, as Erin Bow is a wonderful story teller, but the audio version left me flat and confused.

Those who oversee this world, strive to keep the various  jurisdictions at peace by demanding that each leader surrender a child to act as a "hostage of peace". These children, housed at the Precepture School, are well cared for, educated and are released when they turn eighteen.  However, should their nation enter into war before that time, then his or her life is forfeit.

I kept hoping that Ms. Bow would introduce a twist on the fate of the hostages, that she would find a way to keep them alive.  During their years at the Precepture, they were taught about statehood and politics and they formed life long bonds with the children who were the future leaders of opposing states.  These children should have been kept alive as they were the best equipped to keep the peace.  Kill the war enabling parents and install the peace hostages as the new leaders.  Don't keep killing the children leaving the inept parents alive to surrender yet another child as hostage.

I listened to the audiobook as read by Madeleine Maby.  10 hours 13 minutes - unabridged.

I found her voice characterization confusing.  The voices she used for the computers were smooth and lilting, yet for some of the child hostages, she used broken, halting voices which reminded me of the way William Shatner speaks in some of his roles.   Each time one of the girls spoke like this, I thought she was one of the computers.  Very confusing.  This helped to spoil my enjoyment of the book.  I honestly feel that I would have enjoyed this story more had I read a paper copy.

What I did enjoy was the normal aspects of the children's lives.  They worked the Precepture farm for agricultural produce and cared for the herd of goats.  If you have ever watched goats, their antics are primers for laughter.  The goats in this story were no exception and they served to diffuse some of the tense situations the hostages found them selves in.  Unfortunately, it wasn't enough to overcome the despair I felt for the children's plight.