Two if by Sea by Jacquelyn Mitchard

The opening passages of this book grabbed me and wouldn't let go.  I read with both dread and fascination the rapid chain of events resulting in the turmoil of Frank's life and knew I had to keep reading, I had to learn more and see what this upstanding former police officer would do. 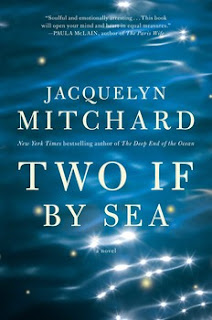 Frank Mercy has everything he wants, a loving wife with a baby on the way, a job he enjoys and welcoming inlaws, in a blink of an eye, mother nature takes it all away.  Still in shock from his losses, he reports to his job and helps to save others affected by the tsunami.  After rescuing a three year boy whose family was swept away, he feels compelled to claim him as his own.  He knows this is not the right thing to do, as the same time, deep in his soul, he also knows that he can't relinquish this boy.

Each time the story line seemed to calm down, author Jacquelyn Mitchard threw in a new twist that set me on edge once again.  It was hard to find a peaceful moment where it felt safe to put the book down.

I enjoyed the characters in this story.  Frank had seen everything as a cop, and the events surrounding his new son, Ian, didn't phase him for long.  He took it all in stride, just as a good parent should.  Claudia was a surprise.  She had no idea what she was in for when she first approached Frank, but being a strong woman, both physically and mentally, she quickly adapted.  The responses of the children seemed appropriate for their ages and situation.  I never for one instant felt that they should have responded differently.

For me, this book was all about family, both the one you chose and the one you actually end up with.  Instead of giving up and succumbing to a long downward spiral of mourning, he accepted what he did have and moved forward.  He forged new bonds and expanded his definition of family.  This story gave new meaning to the saying 'it takes a village to raise a child'.