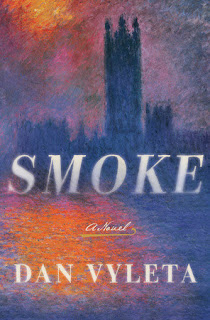 This book imagines a world similar to ours, but one in which sin is noted by the offender's body emitting smoke.  The greater the sin, the darker and oilier the smoke.  Children are born into sin and smoke almost continuously.

Soon after enrolling at an elite boarding school, Thomas is befriended by Charlie, a future earl, who takes him under his wing and helps him to learn to control his smoke.  The both strive to avoid Julius, the school bully, who has never been seen to emit smoke.

I was fascinated by this storyline.  A visual manifestation of sin.  Soon we learned that it was not so clear cut and that there was more at play.  For instance, how could Julius bully other students, yet not smoke himself.  Were noblemen really that good; they never smoked publicly.

I really enjoyed the first half of the book while it remained focused on the boys.  Once it strayed into the adult realm, the storyline got mired in cloaked discussions of politics, faith and scientific investigations.  I found this confusing, not knowing who sided with whom and whether anyone was looking out for the interests of the general public.  As I reflect back, I still can't decide whether it was that I didn't understand what the adults were up to or that the story had veered from the boys that disappointed me more.

Why did smoke have to be good or evil, it seemed to me that it was simply a fact of life.  Once people with power found a way to make money from it, then it became like any other commodity regardless of the impact that it had on peoples lives and well being.  Even though I wasn't thrilled with the entire book, the idea of smoke has stuck with me and I keep pondering what life would be like if we smoked.

To learn more about author Dan Vyleta, visit his website.