A Robot in the Garden by Deborah Install 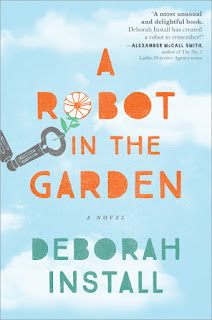 Ben Chambers's life has been on hold since his parents died in a airplane crash several years ago.  He dropped out of vet school and has yet to find a job.   In fact, he even finds it challenging to take the garbage out on time.

One day when he does take out the trash, he finds a small robot named Tang in his back garden.  The next day it's still there and Ben becomes determined to learn more about it.  This is the start of an epic road trip and a trip to reclaim his life.

I fell in love with this story almost from the first page.  It gave me a warm cuddly feeling throughout and Ben's attachment to the little robt was endearing.

Ben is a lost man and when he unites with the lost robot, they become a pair that pulls at the heart strings of the reader.With every mis-step on their quest I found myself cheering for them and hoping that the next leg would be kinder and would draw them closer to the needed resolution.

The idea of a road trip (including flights) with a robot who has knowledge of a toddler is appealing if fanciful.  With the current status of robotic research, this book teeters on the edge of science fiction.  At first, I thought this would be a YA story, but it's much more than that.  Ben finds himself examining his life in regard to how he responds to Tang.As much as he had preconceived ideas about Tang, he also had many about himself and his marriage.  While a robot can't solve his problems, he sure is a great travel companion and character.


A Robot in the Garden is the debut novel for author Deborah Install.

Thanks to Sourcebooks for my review ebook and for use of the cover image.