City of the Lost by Kelley Armstrong 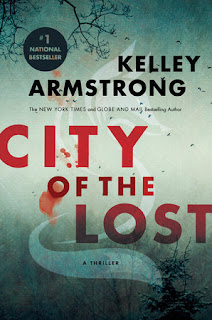 There are some situations in life where the best course of action is to run far and hide deep.  Casey Duncan killed a man years ago and now this past is catching up with her.  Her friend Diane needs to hide from an abusive spouse and has heard about a place where they would both be safe.

Sheriff Eric Dalton from the elusive Rockton, Yukon needs a detective in his town as even people seeking to hide commit crimes. Brutal crimes.

I liked Casey from the first.  She is an action oriented women.  She doesn't let things fester, rather she acts and gets them resolved.  She is also smart, which helps make her a good detective.  Casey is mostly an open book, where as Sheriff Dalton is a closed and locked volume.

As a detective story, this fondly reminded me of those written in the 1950s and 60s where the investigator had to rely on intellect instead of electronic gizmos to solve the case.  At first I thought this would be a relatively easy case for her, but the more she learned, the more she found she didn't know and that not everyone was who they seemed.  At one point I fingered the ultimate culprit, but then dismissed that ideas as further details unravelled and redirected by focus.

There was one setting in the book that creeped me out.  I could truly imagine the panic I would feel in that situation. I couldn't wait for that section to end.

This is a well written novel and a departure for author Kelley Armstrong from her other worldly characters created in some of her earlier books.  The stories of Casey, Eric and Rockton will continue in the next book in this series tentatively titled A Darkness Absolute.