The Doomsday Book by Connie Willis 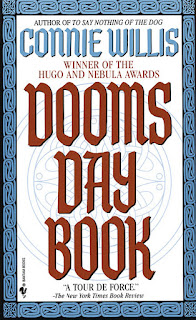 Today it's Ebola, yesterday it was Aids and in the fourteenth century it was the Black Death.  Kivrin is an ardent student of the middle ages and is traveling back to the 1320 for a two week study trip.  She's studied the languages, customs, and religion, has had her inoculations, nothing has been left to chance. The time machine even has a mechanism that won't allow for her to be dropped in a time that would/could create a paradox.  All will be well as long as she is sent to the correct date.

Something has gone very wrong.  Kivrin is not when she is supposed to be and the man who operated the machine is deathly ill.  There appears to be plague in both the 14th and 21st centuries.

Time travel and plague, two of my favourite genres in one novel.  Even though the book was published in 1992, it has stood the test of time well.  Author Connie Willis imagined the use of video phones for communications, but missed with portable phones.  I was amused by some of her characters continually running between buildings and locations to immediately reach each other. Oh for a cell phone.

While Kivrin was the character who time traveled, I was more interested in Professor James Dunworthy, who tutored her about the middle ages and really made her trip a reality.  Not only was he book smart, but also world smart when he stepped up at the university and kept it from falling apart as the current time crisis developed.  One of my favourite characters, was the 14th century priest.  I kept wondering is he truly was a man of god, or was he someone else.

The Doomsday Book finally answered a long stand time travel question.  Can you travel back in time, interact  substantially with the denizens of that time and not affect the future.  This is a well written book that kept me reading late into the night several days in a row.  I don't regret the missed sleep one bit.