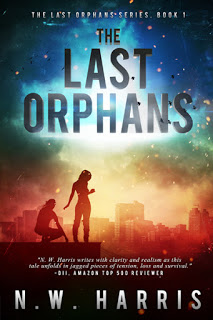 Shane Tucker was just talking with his aunt a few minutes ago and now she is dead.  On his way to seek help in dealing with her remains, he finds more bodies, all adults.  They're dead, all of them, all the adults.  Thus starts the first book of a three part series by N. W. Harris.

Within hours of this disaster, Shane has dozens of children gathered around looking to him for leadership.  Truth be told, he's at as much a loss as them, but he can't let them know or they'll fall apart.  Along with some of the older teens, including Kelley and Tracy, he forms a plan to find shelter and help.

'All the adults are dead' is a frequent theme for YA post-apocalyptic novels.  This one distinguishes itself by explaining how it happens, which I appreciated.  From that point it sets a clear goal, though how it's to be accomplished is up to the kids.  The story developed in a manner that seemed fitting for what teems might actually do.  Stick with what they know and not too much bravado.

In typical YA fashion, this story moves quickly with lots of action and minimal details.  We are introduced to many characters, but really only get to know a few of them in any depth: Shane, Kelley and Tracy.  I felt bad for Shane when his aunt died, but then there were so many deaths, that I lost that feeling and never regained it.

For the most part, I enjoyed this story and kept reading late into the night, but the characters didn't make an emotional connection with me. They needed to exhibit more emotion, to reach beyond their shell shock.  I still wanted them to succeed so that the story would conclude and I'd be finished reading their tale.