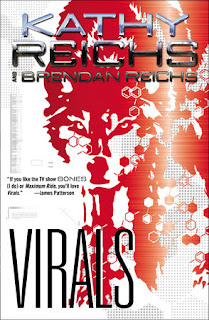 This is a teen version of the Tempe Brennan novels, but better.  Tory Brennan is 14 and has moved to an island offshore of South Carolina.  Her and her friends don't fit in at their school and tend to spend their ample free time together. One day they rescue a wolfdog from a research lab and unlease a sequence of events they couldn't have imagined.

I enjoyed this audio book.  The teens acted just as I remember my kids at that age.  They leap into situations with out considering the consequences. They let their emotions rule rather than logic.  The parents are all secondary characters, the story doesn't need much input from them as the kids carry the day.

I liked the tie-in to the Temperence Brennan books. It gives an explanation for some of Tory's interests and knowledge that a typical teen wouldn't have.  You don't have to have read any of the author's previous  books to enjoy this one.

Author Kathy Reichs stretched the science enough to make the teens illness believable.  With swine flu and bird flu having worked their way around the globe, why not an illness from an animal right there on Loggerhead Island.  I thought that it added an interesting twist to the story that would appeal to the teen reader.

Cristin Milioti does a great job as reader for the audio book.  The kids really did sound like young teens.  My favourite voice was the one used for Chance, the indulged son of one of the wealthiest men in the area.  I don't know how to describe a South Carolina accent, but his dripped of money and privilege.   I listened to the unabridged version  9 hours 4 minutes.

The Virals series has grown to 9 books.