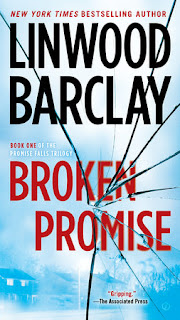 This is an excellent story with a well crafted plot.  Lots of twists.  With each revelation, a new depth was added which kept me guessing which clues were important and which were red herrings to distract me.

David Harwood is trying to get his life back on track when he and his son moved back to his hometown.  Shortly afterward, everything takes a downward spiral.

He is a wide open character that could go in any direction.  Being a long time reporter, he is a good investigator.  This comes in handy when his aunt asks him to find out how her daughter came to be in  possession of a baby that is clearly not hers.

I could not put this novel down.  The smaller town setting  was very appealing with all the personal connections, some stretching dack decades.  I found it very realistic that many of the characters had things in their backgrounds that they now regretted and would prefer never come to light.  Certainly helps expand the suspect pool.

This was a good who done it, though some of the whys were easier to figure out.

Author Linwood Barclay deftly interwove humour into dramatic scenes.  This kept some dark scenes from being over whelming.

The stories of Promise Falls continues in Final Assignment, a short story, and then in the full novel Far From True and then concludes in The Twenty-Three, due out in November 2016.

This is my first read by master storyteller Linwood Barclay and most certainly won't be my last.

Nice review, Heather. I love Barclay's books. I haven't read that many, but I really like his work. I'd definitely recommend "Never Look Away".

At first I wasn't sure I read this one, but as I read your review it slowly came back to me. Sadly, I probably don't remember enough to write a review. Oh well. Really good book nevertheless.