A Promise of Fire by Amanda Bouchet 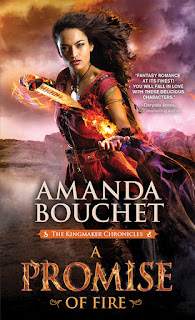 Cat is far more than the circus performer and fortune teller that she appears to be.   Turns out, she has skills that exceed even her expectations.  She is the Kingmaker, the presumed key to a power struggle about to erupt between her adopted home and the neighbouring kingdoms, and Griffin, the warlord of Sinta, intends to have her on his side.  She wants to stay out of it, stay hidden, but others want her for her powers, worst of all her mother wants her back and it not out of parental love.

Now add to the mix a number of gods, including Poseidon and Hades and we have a volatile cast sure to bring mayhem to the quietest of towns.

The story was a little slow starting while I was getting used to the characters and their world.  Once it started picking up speed, it didn't slow and wouldn't let me go.  It became a fast paced read that gave me no time to sit back and ponder what had happened because I couldn't wait to see what would be happening next.

Cat is a strong female character who grows and learns about herself during the tale.

I totally enjoyed the Greek mythology tie ins.  It helped to ground the fantasy with something familiar.  Families play an important role in both Cat and Griffin's lives, both those families we are born with and those be grow to become part of.

This is a lively story with lots of action, but plenty of tender moments as well.


Thanks to Sourcebooks for my ebook review copy and for use of the cover image.