C is for Corpse by Sue Grafton 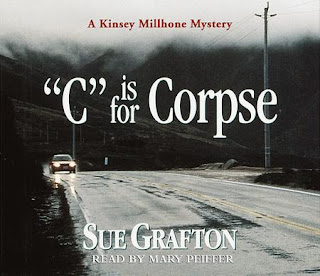 This is my favourite book in the series so far.

Kinsey has been hired by Bobby Callahan to find out who tried to kill him by running his car off a bridge.  Luckily, Bobby survived, but he still feels his life is in danger.

I really liked the character of Bobby and teared up when he died.  It would have been great if his character could have continued, but then it would have spoiled the plot.  Darn, I sure hope author Sue Grafton crafts another character similar to him in a future novel in this series.

After his passing, I found myself cheering Kinsey on during her investigation.  She is such a positive, forward looking woman that I can't help but like her.  In this case, we actually see some of her vulnerabilities which made me like her even more.

I listened to the unabridged audio book read by Mary Peiffer, 7 hours 47 minutes.  Ms. Peiffer also read the earlier books in the series.  I enjoyed the familiarity of her voice characterizations, it made Kinsey seem more like a longtime friend than a paper character.  There is another version of this audio book available read by Judy Kane.

A is for Alibi
B is for Burglar