The Fireman by Joe Hill 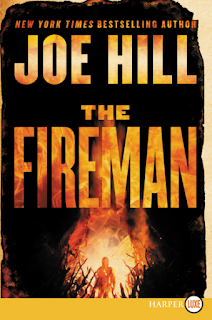 Humanity is being challenged by a deadly new plague.  A spore, commonly referred to as Dragonscale, infiltrates the body eventually resulting in the afflicted going up in flames.  Everyone is afraid that they are going to catch the scale  The knee jerk reaction is to round up the sick, kill them and burn their bodies to stop the infection.  That sure says a lot about society when the experts don't even know how the spore spreads.

Author Joe Hill follows the lives of Harper, her husband Jakob and a man known as the Fireman.  The three follow diverse paths during the course of this epidemic.  I feel that each of these people are essential to the story even if I don't like one of them from the very first time we met.  They represent the very different ways in which people respond to tragedy.

This is a well constructed story.   I particularly like that a huge back story on the characters is not needed.  We learn about the dragonscale and how it affects people in the present and then move forward.  It doesn't matter what they did earlier in their lives, only what they do after the plague starts.  I find the descriptions of the flames compelling.  I can imagine them as a living being and not just a result of combustion.

This is a long book and it took me a while to read, though  I didn't feel it was too long and that things could have been left out.  I would have preferred a few events not to happen, but then again, I am an optimist and like my stories being happy.