The Fourth Stall by Chris Rylander 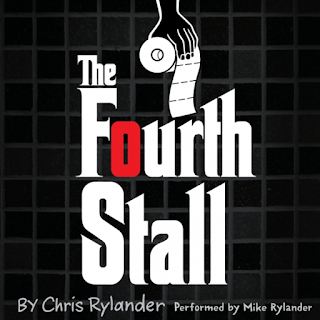 As adults, we often underestimate what our kids are capable of.  A problem arises and we solve it for them thinking that they are just kids.  In The Fourth Stall,  Mac, Vince and their friends show what kids can accomplish when they set their minds and energies toward a goal.

Sixth graders Mac and Vince have been solving problems for themselves and for other kids since their kindergarten days.  They work well as a team and even better as best friends.  All is going well until and older kid starts muscling in on their school and threatening their class mates.  The boys know that it's up to them to solve this problem now before it gets any worse.

I found this book both funny and serious.  At times, the boys are typical sixth graders with their interest in sports and gaming.  Other times, they seem old beyond their years with their concerns for the safety and well being of their class mates.  Friendship and trust play a huge roll in their lives, forming a code for their behaviour.  When that trust is broken, the results are devastating.

I listened to the audio book as read by Mike Rylander, the author's brother. 6 hours 54 minutes.  I was amused by the voice characterisation of the bullies.  Mostly they had big booming voices and when an odd squeaky one crept in I had to laugh.  The women's voices were the best, exactly as I imagine a sixth grade boy would think his mother sounds.

Young readers will enjoy the antics of the friends and how they have learned to deal with the bullies of their school.  The sports angle will cry out to any fan who wants to see their team in a pennant race.  While the situations the kids find themselves in are serious, there are lots of funny incidents that help to defuse the tension.  The stories of Mac and Vince continue in  The Fourth Stall Part II  and III.

For further information about this series and about the author Chris Rylander, be sure to visit his blog.

Hi Mystica,
At first, as I was reading this book, i was reading as an adult and was on the fence about it. Then I spoke about it with one of my co-workers and she reminded me that it was written for kids and their sense of humour. I then read the rest of the book with that perspective and enjoyed it so much more and understood the funny side of it. Kids want to be in control of parts of their lives and are quite capable. It's been so long since i attended school that the memories of the stresses of being a kid are fading. This certainly brought some of them back to mind.