The Spawning Grounds by Gail Anderson-Dargatz 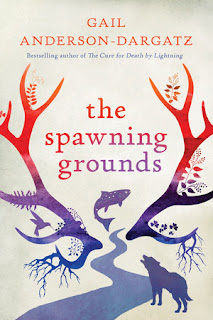 The Spawning Grounds is a sensitive look at the relationship between a First Nations Community and their white, farming neighbours.  While Stew is set to sell his farm to developers, the Secwepenc (Shuswap) community is protesting the encroaching development.

The cultural and spiritual differences of the two groups leads to troubles for both.  At risk is the further destruction of the salmon spawning grounds which lie in the river between their settlements.  If they could work together to find a way to resolve their differences, create an understanding, then they might save the salmon at the same time.

In the middle of this confusion is Brandon, the grandson of the white land owner.  After a near drowning the river, he undergoes a major personality change which his father attributes to mental illness.  His neighbour Alex, from across the river, views his illness differently, as a possession by the  the mystery, a spirit trapped in the river.  He knows that if they can find the reason for the spirit remaining in the river instead of travelling the path of the dead, then they can save Brandon and possibly even save the salmon.

I was drawn into this story from the opening pages.  Learning the history of the area and the creation of the mystery seemed in keeping with other First Nations stories I have read.  Both sides viewed the issues as them versus us and both were adamant that they were right.  It was interesting to see how Brandon's sister Hannah looked at both sides and attempted to find a way to bridge the two belief systems.

While Ms. Anderson-Dargatz is not a First Nations author, she presents both sides in a fair and honest manner.  I enjoyed her writing style and look forward to reading some of her earlier works.

Thanks to Penguin Random House for my review copy and for use of the cover image.
Posted by Heather at 08:00