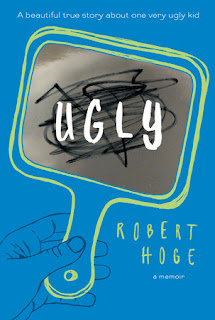 After a new baby joins a family, generally, the family and friends flock to visit and comment how cute the baby is.  If it's not so cute, they say that it has it mother's eyes, or the fathers nose, or something equally sweet.  When Robert Hoge was born, his mother wouldn't even look at him for a week.  He had a giant tumor in the middle of his face that forced his eyes almost to the sides of his head and both his legs were deformed.  He was and still is ugly.

I'm not being mean, I'm repeating what he wrote in his book.  His face is far from conventional and from what I read, Robert is far from conventional himself.  From his earliest days, he underwent numerous surgeries.  The first ones were to save his life and the later ones were in an attempt to make his features more acceptable to those around him.

Robert Hoge is a remarkable young man.  He has thrived in  a society that places far too much value on appearance and that considers substance as a poor second.  Rather than hide away, Robert lead an active life and quickly devised coping strategies to deal with the rudeness of others.  He admits that comments from bullies and passing people still can hurt, but that he's learned to deal with that hurt and put it where it belongs.

This is a well written, positive story.  It's obvious that Robert builds on what has gone well in his life.  He could have easily been overwhelmed by the negative things such as the bulling and the taunts, but choose to rise above them.  He sets a good example for all young people struggling to find their way.  He'll be the first to tell them, that you don't give up when you fail at your first challenge, you keep going and working at it until you find that at which you can succeed.

This book is written for ages 8-12, though is also enjoyable for adults. It should be in every school classroom.