The Paper Princess by Erin Watt 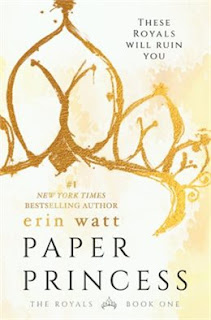 Ella Harper is finding it tough to transition from a struggling orphan to the reluctant member of an extremely wealthy family whose sons  rule the private academy that they all attend.  She had intended to keep her head down and immerse herself in her studies, but she is distracted by Reed, one of  her gorgeous new brothers, and by the various bullies at her new school.

Ella may be beautiful, but she is made of steel.  She is tough and knows how to take care of herself in most situations.  A ritzy school and an overbearing bunch of brothers may be overwhelming at first, but she has worked in tougher places and has come out fairly unscathed.

Reed and his brothers have no idea what to expect of Ella, and are confused as to why their father even brought her to live with them.  They are still hurting from the death of their beloved mother who was the glue that had held them together as a family.

What really stands out in this story, is the distrust between all the members of this expanded family.  They are all so wrapped up in their own dramas, that they don't communicate with each other.They rely on their own suspicions instead of having honest conversation with one another.  It's interesting to see how they slowly start to break down these barriers.

Due to the sexual nature of some passages, I would recommend this book for older, more mature teen readers.  I hope to learn that they become more of a family in the next book, The Broken Prince.

The Paper Princess is the brain child of authors Elle Kennedy and Jen Frederick writing together as Erin Watt.

*I received an advanced reader copy of this book from Indigo Books & Music Inc. in exchange for an honest review*

#IndigoEmployee
Posted by Heather at 14:56

A new one for me. Thanks for the reviews.