Where the Heart Is by Billie Letts 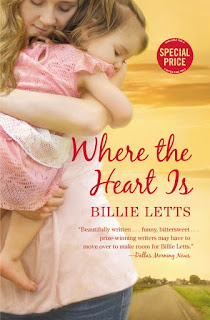 This is a sweet story about a young, pregnant woman girl who is abandoned  in  a Walmart parking lot by her nar-do-well  boyfriend.  She ends up secretly living in the store until the birth of her baby two months later.  Novalee seems like an earnest person, who just wants to make a better life for herself and her baby.

During those two months, she becomes acquainted with several residents who help to reassure her that life can be better.  Sister Husband offers her unconditional friendship, Ben gives her a small tree and Moses gives her a photo album.  Shortly after that, she meets Forney, the librarian who opens her to a world in knowledge.  All of these people willingly help Novalee with no expectation of her being able to help them in return.  It's the first time in a long time that she has felt herself to be at home.

While I think it is unlikely that anyone could secretly live in a department store for two months, I didn't let that deter me from enjoying the story.  I liked how Novalee went from being a stranger in town, to finding friends and people she could care for as she would family.  A heart warming story.

#IndigoEmployof
Posted by Heather at 21:28

I agree about the department store living, but everyone likes a nice warm ending.