Neil Flambe and the Marco Polo Murders by Kevin Sylvester 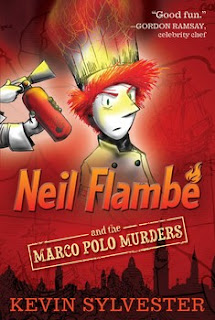 The premise of a child prodigy chef who solves mysteries in his spare time sounded good and by the time I finished the first chapter I was hooked.  Author Kevin Sylvester has created a complex, yet easily likable character in Neil Flambe.

From his earliest years, young Neil showed an affinity for food and for it preparations.  Now, at the age of fourteen, he owns a renown restaurant that is in high demand.  On a contingency basis, he also helps the local police to solve various crimes where an acute sense of smell is an asset.

When someone starts killing the top chefs in Vancouver, Detective Nakamura calls in Neil to sniff out the murderer.  Not only does he sniff out a seemingly new scent at the scenes of the crimes, but the notes left on the victims lead him to research the Italian explorer Marco Polo.

Neil is a complex character.  At times he is definitely a fourteen year old, with limited social skills  and big on self worth.  Admittedly, he is a great chef and he doesn't let anyone forget it.

I would recommend this book for any young reader who has an interest in food preparation.  It would be a good selection for parents to read with their children.  The author has a good sense of humour and has included lots of details to amuse adults such as the food related names of most of the characters.  Yes, several people are murdered in this book, but the story does not linger on the bodies, rather it moves quickly to the food and spice scents that linger behind.

I listened to the audio book as read by the author.  6 hours 17 minutes.