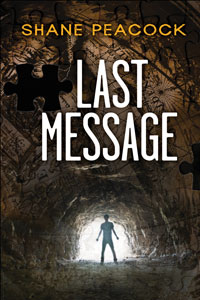 At the reading of his grandfather's will, Adam and his six cousins learn that their inheritance is dependent on them each completing some difficult challenges.  Adam is to travel to France and complete three tasks.

I was not very impressed with Adam when he was first introduced.  He is dating a girl who seems to be solid and likable person, yet at the same time he is trying to impress a girl deemed to be a big catch.

The challenges that Adam has to complete are not only physical in nature, but also have a mental component.  It was interesting to listen in on his thoughts while he struggled to do the right thing with regard to the first challenge.  Even though it must have been difficult to learn of one of his grandfather's shortcomings, he did learn so much more about him and about himself and about the type of man he wants to become.  I felt that learning his grandfather wasn't perfect gave him the needed permission to make normal kid mistakes and to learn from them.  He certainly did a lot of growing up during the trip, which I suspect is what his grandfather intended by having the boys complete these challenges.  I'm looking forward to reading more books in this unique series.