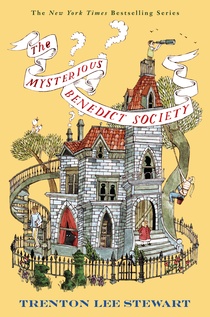 Four unusual children find themselves in a challenging situation  after responding to a newspaper advertisement stating it was looking for gifted children.  After undergoing a series of bizarre tests, the four are invited to present themselves at a certain address at a stated time and date.

The opening of this book had my attention from the start.  I had no idea where the story would lead, but I was reassured that it would be something unique and it was.

Over the course of the story, the children went from total strangers to dearest friends who would risk their lives for each other.  In the process, they learned not only a lot about each other, but even more so about themselves.  They also learned that adults are complicated and not always what they seem.

I mostly enjoyed this book, though at times I felt it was on the  long side and that it might loose the attention of less dedicated young readers.  I did like that the things the children were asked to do, were all within the realm of what young people are capable of doing.  They weren't asked to complete impossible tasks nor the risk their lives at highly dangerous activities.  Author Trenton Lee Stewart kept the roles of the four children well within reason, though not always the common or usual activities of today's students.

Recommended for readers age 9 - 12, though can be enjoyed by those outside that range.

Sounds like a good one for adults, with lessons to be learnt!