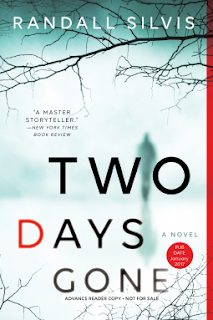 A mother and her three young children were found brutally murdered in their beds and the husband/father was tentatively identified as the man seen fleeing the scene.

Could Thomas Huston, a respected professor and re known author truly have murdered his entire family, Sergeant Ryan DeMarco knows the man and just can't accept that this is possible.  He's spent enough time in conversations with Tom to know how out of character this is and to suspect that something more has happened.

I liked the character of DeMarco. Even though he is friends with Tom, he doesn't let his feelings overwhelm his investigation, but instead uses them to glean insights into what he might have done after the murders.  He is a good, thorough investigator who doesn't let his personal flaws affect his work.  I'd like to see his character continue in a future novel by Randall Silvis.

As for Tom, I really didn't get a feel for him.  He was struggling with shock much of the time he appeared and was having trouble determining reality from events in the book he was researching/writing.  It did provide an interesting look at how an author develops a character and his or her story.  He seemed an honest man with a considerate nature.  I did understand why DeMarco liked him.  I could even imagine the two of them sitting together in the evening on a deck, drinking cold beers and having comfortable conversation.  Fortunately Mr. Silvis had much better plot ideas that made for more intriguing reading.  I had no idea where this story was going and the twist and turns in the plot made for good reading.

I received and advance copy of this book from Sourcebooks Landmark and Netgalley in exchange for an honest review.