I Hunt Killers by Barry Lyga 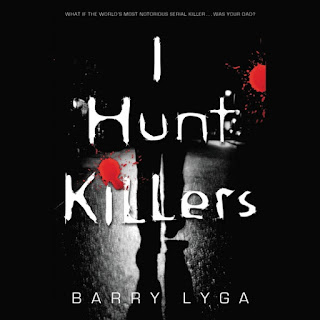 At seventeen, Jasper Dent had experience more than most people would ever want to in an entire lifetime.  He is a good kid trying hard to live down his father's dubious honor of being the most prolific serial killer in the United States.  Jasper, or Jazz as he's know to his few friends, wants, make that needs, to prove to himself and the the public, including the Chief of police G. William Tanner, that he is not like his dad in any way.

When a woman's body is found outside town, appearing to be a copy cat killing using his father's MO, Jasper is desperate to help the police solve the murder.  Even with the help of his best friend and his girl friend, he struggles to maintain his perspective and possibly his sanity.

Author Barry Lyga has written one of the most unusual teen novels I've read.  Jazz is a good kid who had a bad parent.  He has been trained from the earliest years by his father to become the best serial killer there has ever been.  It was interesting to listen in on his internal self talk, would he be good or bad. Nature vs nurture  in an intense battle.  At times I found this audio book difficult to listen to, not due to the deaths, but due to the bad parenting.  As a parent myself, I can't imagine how Billy Dent could expose his young child to such activities.  While most teens will never have to face these particular decisions, they do have to make choices and will rely on their family, friends and other significant adults to help them along the way.  I found myself cheering for Jazz and hoping that he would continue to make good decisions.

I hunt Killers is part of trilogy plus prequel.