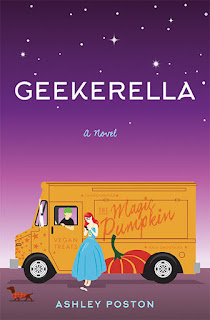 A fun retelling of the Cinderella story with a few modern twists.

Danielle is a fangirl of the sci-fi show Starfield.  Even though it's been in re-runs since before she was born, it's still her favourite.  In a plan to escape her horrid step-mother and manipulative step-sisters, she intends to enter the costume competition at the upcoming cos-play convention that her late father helped co-found years earlier.

Darien Freeman has been cast to play Prince Carmindor in the Starfield remake.  He only hopes he can live up to the role since he has secretly been a fan of the show for years and doesn't want to disappoint himself and the fans of the show.

Danielle and Darien connect in a an unexpected way and develop and online relationship where they quickly come to depend on each other.  I eagerly awaited to read each new text message to see what would be revealed. It was interesting to see how each of them found it easier to relate and reveal secrets to a stranger than to people they'd know for years.

This story serves as a reminder to not judge people by their appearance.  Take the time to get to know them instead of jumping to conclusions.  People are more than their costume/appearance.

Author Ashley Poston wrote an entertaining, though sensitive story.  All the little details, such as Franco the neighbour's dog, brought the story to life.  You don't have to be a fangirl/fanguy to enjoy this book as the storyline provides enough explanations for the un-initiated.

I received and advance reader copy of this book from Quirk Books and Edelweiss in exchange for an honest review.