House of Robots by James Patterson and Chris Grabenstein 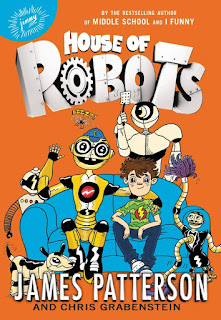 Sammy is already "unusual" in his class and feels he stands out for all the wrong reasons.  School life doesn't get any easier after his mother invents a robot named E and sends them to school together.  E does make an impression at school by committing an escalating number of mistakes which get him suspended.  At first Sammy is glad that E is back in the workshop, then he starts to miss him.

This is a funny book that kept my laughing most of the way through.  I did tense when ever the class bully Cooper Elliot made an appearance, hoping each time that he would be dealt with by the teachers or principal.  I actually cringed when the students would play dodge ball in gym class.  eeks, do they still  play that horrible game.

Along the way we get to meet Trip, Sammy's BFF who has his own insecurity issues.  Sister Maddy has an immune disease which keeps her at home, but not out of the antics of Sammy and E.

This book would be a great transition book for those young readers who are moving from the cartoon style potty humour books to a more traditional chapter book.  It also shows that friendships do have tough times and that they take effort to maintain.

I listened to the audio book as read by Jack Patterson, James' son. Unabridged, 3 hours.