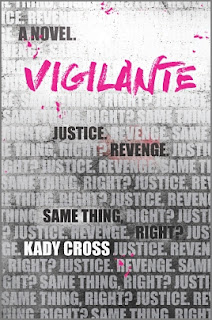 No matter her age, every girl has the right to dress as she chooses, go where she wants,  and to change her mind and say no.  Just because another person is bigger, stronger, faster or sneakier, doesn't mean that it's acceptable to take advantage of her.

Magda was at a party when four of her classmates drugged and then sexually assaulted her and posted video of the acts to the internet.  She was then repeated victimized when the people around her kept finding way to lay the blame on her.

After Magda's suicide, her best friend Hadley decides to get revenge on the attackers.  Turning vigilante is not the best way to confront these men but since the police had no success in prosecuting them, she sees no other option.

Author Kady Cross brings up all sorts of questions about acceptable behaviour and victim blaming.  It would be a good selection to read in a class room setting accompanied by a facilitator/teacher led discussion.  While this book contains subjects that are difficult to read, I found it well presented and reflective of teenage society.  Hadley feels that what happened to Magda is all her fault, that it all centers around her.  A natural feeling for teens who don't yet see the bigger world picture.  It's important that teens have a safe setting where they can learn about their rights and how to behave properly in society.