A Darkness Absolute by Kelley Armstrong 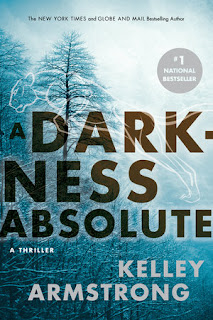 Former Detective Casey Duncan moved to town to escape her past and to solve a murder.  She has just started to settle in when a missing person case slams into her.

This is the second book in the series and Casey, Eric and Will have found their stride as law enforcement in this northern town.  While they have grown to trust each other, they continue to untangle the mass of secrets and lies upon which the town is structured.  All of which make finding the perpetrator of the latest crime(s) very unlikely.

I liked A Darkness Absolute even more than I enjoyed the first book, City of the Lost.  Casey, Eric and the townsfolk felt more this people and less like book characters.  While reading the first book, I had more of a summer camp feeling about town, where as now, it evoked more a wild west, frontier town image, more permanent.  This llatest crime was no cookie cutter felony that could be solved by out of the book techniques; Casey had to employ some out of the box thinking to get to the bottom of the disappearances.  Even though I had an inkling of who might be the perpetrator, I wasn't sure why, just that I had a creepy feeling about him/her.  I was kept guessing up till the conclusion.  I am still mystified about the motives of several of the towns people.  Ms. Armstrong gives us more details about some of the residents, but she also adds further mystery about the distant council.

Author Kelley Armstrong has written a solid second book to the Casey Duncan series and I certainly hope she doesn't stop here.

City of the Lost
Bitten