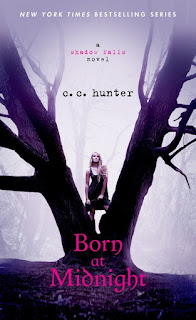 She made one bad decision and her sent her off to a summer camp for troubled teens.  Shortly after her arrival, Kaylie learned that the camp was actually for teens of a different nature: werewolves, vampires, witches, shape shifters and faeries.  Before that day, she hadn't even imagined that these type of people existed, let along that she might be one of them.

She quickly learned that the purpose of the camp was for the kids to explore their new reality and powers and for them to forge strong ties with member of the other races.  To complicate matters further, teenage hormones came into play.  Kaylie had to come to terms with her supernatural heritage, accept the differences of her new friends and figure out this boy thing.

I really enjoyed this novel.  For me, summer camp stories tend to invoke fond memories of  camps I attended in the past.

**spoiler alert
It was inspiring to see people who would naturally be mortal enemies instead become friends and in fact become fierce protectors of each other.

I listened to the unabridged audio book as read by Katie Schorr.  She dis a good job of both the female and male voices.  I had no trouble telling them apart.  It was a little harder to tell that the camp leaders were older than the kids, but then again, they weren't all that much older...

The Shadow Falls series continues in Awake at Dawn.

C. C. Hunter is the pen name of Christie Craig.