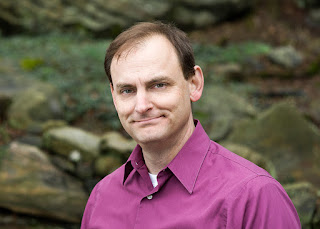 Today I have a treat for you, a guest post by author David Neilsen.  On Tuesday, I posted a review of his debut children's novel Dr. Fell and the Playground of DOOM.  One of the aspects of the novel that I love are the names.  They are so rich and expressive and add an extra depth to the story.

Mr. Neilsen has shared with us how the naming evolved from simple character names of  Nancy, Gail and Jerry to the tongue twisters such as Southeast North Northwestern Academy.  I hope that you enjoy learning how this came to be.


My Names
By David Neilsen

I was not deliberate in making the names of the characters and places in my middle grade novel, Dr. Fell and the Playground of Doom such an integral part of the story.

Dr. Fell’s name comes from the inspiration for the book--a drawing by the late children’s illustrator Trina Schart Hyman entitled “Dr. Fell.” My three protagonists--Gail, Jerry, and Nancy--were three first names I chose relatively early on in the process. There was nothing overtly silly about them. The name of the street they all live on, Hardscrabble Street, was taken from an exit on a highway on my way to visit my in-laws. The early names of the other denizens of Hardscrabble Street and the surrounding area were all relatively mundane. The local school started life as McKenzie Gossamer Silverbag Elementary School. It’s a silly name, yes, but it means nothing.

But somewhere after I’d written a few chapters, things changed. The main reason for the change was Dr. Fell himself. As I wrote him, I found the character using very particular language, words normal children might not know off hand. I did this because Dr. Fell likes to be smarter than everyone. He likes to make people feel stupid. His “What I mean to say is…” line became a mantra, his way of subtly putting everyone else in his or her place.

The first of the ‘new’ last names that popped into existence were those of PTA co-president Candice Gloomfellow and PTA Co-President Martha Doomburg. It was in many ways an in-joke for me alone. You see, I spent three years as the President of our local PTA, and for the first of those years, I was, in fact, a Co-President. I always thought that was funny, so I put it in the book. The Gloom and Doom names just came out of thin air and I liked them.

But then, of course, Candice and Martha had to have children, whose last names would also be Gloomfellow and Doomburg. It was around this time that Gail, Jerry, and Nancy got last names--Bloom and Pinkblossom. Just like that, a format was created and I dove in with gusto.

My heros had positive, nature-friendly names. All of their friends on Hardscrabble Street (and then on Vexington Avenue, Von Burdon Lane, and Turnabout Road) had gruesome, nasty last names. I looked for sickly-sounding words like Rot, Fetid, Bracken, and Puss and then added just enough to the end of the name to make it sound like an actual name while still retaining the obvious nod to the disgusting.

Then it became obvious that other kids were all better off than these kids. So they needed names that reflected this. Goldbaum. Blingforth. Plentyson. Even the teachers got into the act. Mrs. Weathini. Assistant Principal Richman. Mrs. Worth.

The various school names then fell in line. One of the later schools to be mentioned was Ford Garfield Taft Elementary. I took a second look at that and decided then and there to go back and rename all of the public schools after former Presidents. I was too fond of Southeast North Northwestern Academy to change that name, and I convinced myself that since it was a private school, it could skip the three Presidents meme.

There will always be those who find the names distracting, but by and large people seem to like it. They get it. They appreciate the play on words.   Names can tell a lot about a character-  all you have to do is read Harry Potter to know that. Making the decision to go down that route can threaten to be overwhelming, but when it works, it helps bring everything together.