The Girl Before by J. P. Delaney 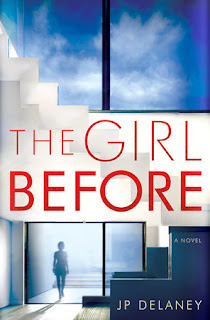 In the currently overheated housing market, buyers are paying crazy sums of money over the asking price for listed houses.  They seem willing to pay almost any price for what they deem their perfect house.  Author J.P. Delaney, aka Tony Strong, takes this concept a step further in The Girl Before.

Jane thought she had found the perfect house even though she had to go through an elaborate interview process and follow a rigid set of house rules.  As she found herself loving living there, she started to learn about Emma, the previous tenant. The little clues were starting to build up indicating that living in this house was not all it had promised to be.

I enjoyed the way this story if told in alternating chapters between the present with Jane and the past with Emma.  Several times I got mixed up with whose time I was in and that served to make the book even more creepy than it already was.  I don't think I could ever comply with the owner's minimalist lifestyle rules, though I did appreciate the thought processes by which the two women came to accept and then thrive within them.  Once they stripped away the surplus belongings, they both learned a lot about themselves. It certainly did make for an interesting thought experiment as I considered what I couldn't live with out and what I could easily part with.

I enjoyed following along with Jane as she tried to understand her landlord.  Each time I felt I had a handle on him, there were new revelations that set me back.  This book kept me guessing at the truths up till the end.  It was creepy and had me looking over my shoulder at bumps in the night, but it was also reassuring with the new strengths that Jane found within herself.  A very good read,

You might enjoy this New York Times article about the author and the book.