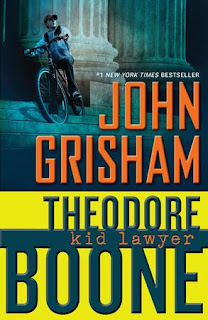 This is an easy to read book that introduces kids to the legal field.  Both Theodore Boone's parents and uncle are lawyers, he knows most of the lawyers and judges in town, of course he wants to become a lawyer himself.  First, he has to finish the eighth grade, after all, he's only thirteen years old.

Theo is used to the kids at his school coming to him for legal advice for themselves and their families.  Usually, it's for small things such as  retrieving a runaway pet,.  This time it's much bigger and it could affect the outcome of the biggest trial to be held in Strattenburg in decades.  Even he is at a lose of how to handle this legal situation.

Theo seems like a normal kid with concerns about his classmates and whether a particular girl likes him, but then he spends his spare time visiting the courthouse and following various trials.  That he has a wealth of legal knowledge is not surprising considering he often hears his parents talking about cases.

Author John Grisham has introduced a well rounded character in Theo.  He has an uncle with a messed up background, a school friend in the midst of a custody battle and a client with multiple difficulties.  The built in suspense of the trial is further exaggerated by these unknowns.

As an adult reading this book, I found it entertaining and fairly realistic in Theo's portrayal.  I feel it would be well received by a young reader who wants a more challenging book to read.

I listened to the audio book as read by  Richard Thomas.  5 hours 4 minutes.