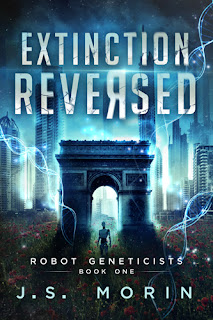 This is a refreshing, original story.  Humans perished from the earth over 1000 years ago.  Over that time, robots have endeavoured to cleanse the environment and rebuild the resources and structures to make it habitable once again.  Even with all their progress, they have not yet reached the technological level where they are able to successfully clone people.  That has not stopped a number of rogue scientists robots from trying and failing until one experiment, Eve 14 escapes from the lab.

The story then follows Eve as she ventures into the world outside and experiences much that we kept from her by her creator.   It is not a happy go lucky life on a reborn earth, but rather a race for Eve to escape the clutches of her crazed creator.

I totally enjoyed this take.  It was unique from other robot stories I've read and nothing much like the cute cartoon movie Wall-E (which I loved).  The evolution oft he robot society wand hierarchy is well done.  With 1000 years for them to work, it's not surprising that their world would be so rich and detailed.

This story did have a few ah-ha moments I didn't see coming, though I knew how it had to end and I enjoyed following it's path.