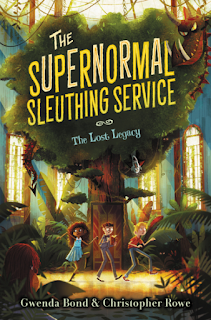 A wonderfully creative story that is sure to catch the imagination of any young reader.  With a pinch of magic, a dash of insecurity and a heavy serving of whimsy, authors Gwenda Bond and Christopher Rowe have created a hotel in the heart of New York city at which most children would love to stay.

Stephen's first visit to The New Harmonia Hotel is on the day of his dear grandmother's funeral.  That is the same day that he learns that there are indeed monsters, or supernormals as they prefer, in this world and that is is one of them.

I loved this book.  It is funny and then suspenseful in the next moment.  With all the different creatures in the hotel, Stephen must quickly learn to be sensitive to their different appearances and manners so as not to offend.  At the same time, he is grieving the lose of his grandmother, moving to a new state and learning huge secrets about himself. Wow.

The story is brimming with amazing characters, two of my favourites being Cindermass and the elevator.  Nope, not going to tell about that one other than to say that Stephen shows the strength of his character by his treatment of elevator.

I wholeheartedly recommend this book to your middle schoolchild.  This is the first of a new series.

I received and advanced reader copy of this book from Indigo Books and Music Inc., in exchange for an honest review.