The Detective's Assistant by Kate Hannigan 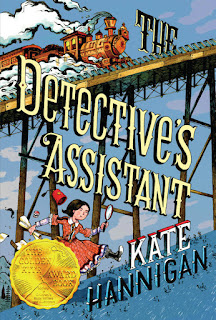 This is a well told story based on the true life of Kate Warne, the first woman detective of the Pinkerton Detective Agency.  The character of Nell is fictional.

From the first chapter, I was sucked into the story and couldn't let it go.   I listened to the audio book almost non-stop.  Nell is very rough around the edges and in need of someone to take her in.  Her aunt Kate is a young working woman with no inkling of how to care for a child.  Together they make quite the pair.  The brash youngster and the refined lady.  How could I not love them and root for their success at forming a family.

I enjoyed learning some of the history of the Pinkerton's, the politics of 1860 and of the Underground Railroad.  It was thrilling each time my home town of St. Catharines, a northern terminus of the railroad, was mentioned.

I listened to the unabridged audio book as read by Christine Lakin.  She did a marvellous job of the very different characters especially when Nell and Kate were working undercover.  She captured the youthfulness of Nell and her brash nature.  I had no trouble believing her to be that rural farm girl.

Author Kate Hannigan brought the Pinkerton's to life and clearly showed both the excitement of being a detective as well as the great risks that those women and men take in that job.