More of Me by Kathryn Evans 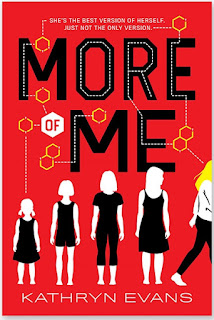 As my daughter travelled through her teenage years, she tried on all sorts of personas in an attempt to determine who she wanted to be.  Punk, drama queen, athlete and so on.  With each change, she learned more about herself and in time, she picked and chose those bits that she liked and melded them into the wonderfully diverse person she has become.  In More of Me by author Kathryn Evans, Teva has been forced into a similar situation, though not one of her choosing.  Each year, her new self splits from her older self and goes out into the world to continue as Teva, while the pre-existing, older self hides away in the house continuing on at that age.  Sixteen year old Teva likes her life and wants to keep it,  and at the same time, fifteen year old Teva is determined to reclaim hers.

At sixteen, Teva should be have a fun, carefree time. She is almost finished high school, has a loving, attentive boyfriend and best friend who keeps her grounded.  Will this be enough to get her through the struggle she is having in trying to determine what is real in her life and that which is imagined.

I loved this story.  It has such a unique story line that it kept me guessing through out.  I had this niggling feeling in the back of my head that wouldn't let me accept one truth and deny the other.  Each time I thought I knew the truth of Teva's life, some other clue would develop and I'd be back on the fence.

Teva's life epitomises what it is grow up. At each birthday, you look to the future and seize all that which you decide is the new, mature you and discard all that which made up the younger you.  Each year you become a new, older you, with the younger you left behind.  Each of us, even Teva, gets to decide how to integrate that old life with the new that it yet to happen.

This is  a wonderful and imaginative debut novel from British author Kathryn Evans.  I look forward to reading future novels from such a fertile imagination.  And yes, I do agree with her, that pink can be fierce.

I received an advanced readers copy of this book from Indigo Books & Music Inc., in exchange for an honest review.