Warriors #1: Into the Wild by Erin Hunter 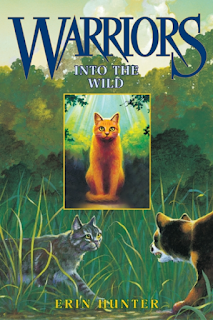 Rusty, a kitten,  has only ever know the comfortable life in a house, until one night when he ventures into the woods behind his owners house.  There he meets a wild cat, which starts him off on an adventure that changes his life.

I had heard good reviews of this series from a number of young readers and I wanted to check it out for myself.  The story line does stand up to their praise.  The authors have created a rich world of cats that live outside the bounds of the humans.  They have a well developed society that is governed by a strict moral warriors code.  When Shadow Clan begins breaking those boundaries, all the clans are affected.

I was surprised how much I enjoyed this book.  I forgot quickly that the characters were all cats and was drawn into their daily lives.  The readers sees the cats' world through the eyes of kittens Firepaw (Rusty's new clan name) and Greypaw.  From the moment they meet, they are drawn together and become the best of friends.  This is lucky for Firepaw as he has a lot to learn about living out of doors, things that being a house cat never prepared him for.

I can certainly see why this series remains popular with the middle school students.  It is full of action and cats to cheer for as well as a few cats to dislike.  The story moves quickly and covers topics that kids can relate to such as bullies, yes there are cats that are bullies, who knew.  Even though this book was written in 2003, it has aged well. The clans are under stress as their environment is being threatened by human development.  There is not enough food to go around, yet they don't want to leave as this is their ancestral homeland.

There are enough books in this series to keep an interested young reader going for at least a year.  Visit the Warriors web site for a full listing of the titles.  I would recommend starting with this title, the first written.

#IndigoEmployee
Posted by Heather at 00:01

I've never heard of this series. Thanks for highlighting it. I'll be sure to check it out. Cat and books. What could be better? :)